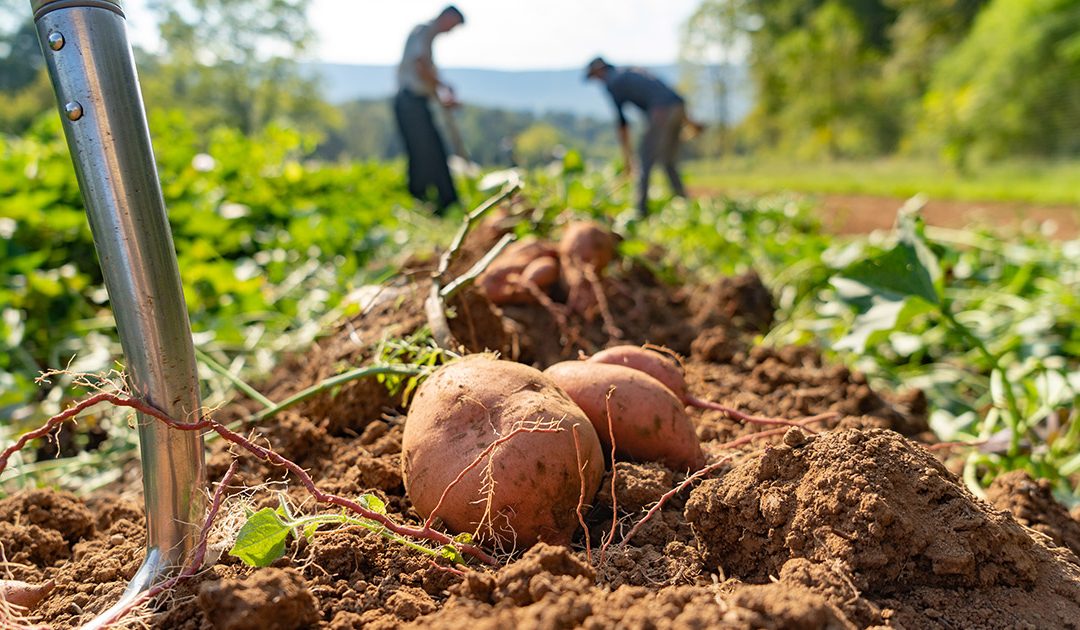 Wildwood’s Farm has been able to bring in around 4,000 sweet potatoes this fall, with the last ones getting pulled out of the ground just in time for Thanksgiving. The Natural Food Market has made a couple thousand dollars so far by selling the taters.

Farmer Nathan and his former colleague Chris Holland decided to buy 2,000 sweet potato slips from an organic farm last summer, and plant those in the field. It was a massive undertaking for which they got a lot of help from workers from other departments. “Sweet potatoes grow well in hot and humid climates, which is what we have here in Georgia”, says farm manager Nathan.

And growing they did. After months of upkeep and nourishment, they were ready to get dug up. Again troops of Wildwood workers pitched in, some cutting off the runners with machetes, one duo loosening up the ground and pushing up the taters with shovels, and a third person pulling them out of the ground, all trying to dodge fire ants as they went.

“These potatoes will be good for at least a couple of months”, says farmer Nathan. “We sold them to some retail stores where they wanted organic sweet potatoes, but most of them we give to the kitchens at the lifestyle center and Center for Health Evangelism, and to our Natural Food Market to be sold there.”

Long before Nathan became the farm manager at Wildwood, he grew produce in his own garden next to his house, including sweet potatoes. “A neighbor gave me some slips, so I decided to plant them, but I’m honestly not a big fan. My kids don’t like them much either. It’s not my dream to grow sweet potatoes. If I’d have to choose though the Asian kind has my preference.”

But despite sweet potatoes not being high on Nathan’s farm wish list, he is planning on planting them again next year. “We might have less than this year, but we will definitely keep growing them.”